Google has just announced via a post on the Inside AdSense Blog that multiple Google-certified ad networks will soon be competing with AdWords advertisers to appear on AdSense sites. This means that non-AdWords publishers will soon be able to bid on Google ad auction. 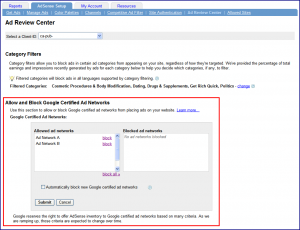 For AdSense publisher this means new ways of generating revenue from their display ad space. While for AdWords advertisers, this would mean some adjustment on their ad campaign allocation and budget to compete against these ad networks on prime display ad spots.

Additionally Google will also not allow these ad networks to collect any user data to be used for internet-based advertising.

This new feature will be initially available for  AdSense publishers in the U.S. and Europe.