Google purchased augmented reality (AR) company Focals by North. Focals by North provides frictionless access to mobile apps via a heads up display that only the wearer can see.

According to the By North support pages, the Focals product allowed users to see baseball scores, weather, answer texts, access their calendar and other useful functions.

Why This is Better than Google Glass

Google had it’s own AR glasses that failed.

Google’s glasses were bulky and looked awkward. Google was essentially trying to engineer a laptop on your face.

The built-in camera gave it the perception of being creepy. Many businesses like bars and restaurants prohibited their use in order to protect the privacy of the other patrons.

Focals by North is a product that focused on being discrete as well as useful.

The glasses were not the computer. The computing power was in a user’s cell phone.

The glasses connected to the mobile phone via Bluetooth and functioned as a controller and a heads up display.

The Focals by North product looked stylish, in contrast to the clunky awkwardness of the Google Glass.

Another factor that made them better than Google Glass is that operating them is discrete.

According to an article in 9to5Google, the Focals were operated by a mini joystick that could be manipulated discretely from a jacket pocket.

Messages could be answered using pre-made suggestions, no typing required.

What this means for the search marketing community is that Internet ecosystem, formerly predicated on web pages viewed on desktop and laptop devices, continue to evolve into a more ubiquitous presence that is increasingly shifting to voice and AR technologies.

The trend is for technology that fades into the background. Google calls this, ambient computing.

This is how Google says the future of the online ecosystem will look:

“From 10 blue links on a PC, to Maps on your mobile phone, to Google Nest Hub sharing a recipe in the kitchen, Google has always strived to be helpful to people in their daily lives. We’re building towards a future where helpfulness is all around you, where all your devices just work together and technology fades into the background.

We call this ambient computing.“ 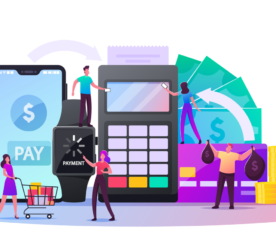