There’s an interesting findings discovered by research company Rapleaf which made a study of around 120,000 webmail accounts from users of various webmail client including aol, gmail, hotmail and yahoo. According to the report, while Gmail users are more connected and have more friends on a social network, other webmail users however maintain more social networking profiles. 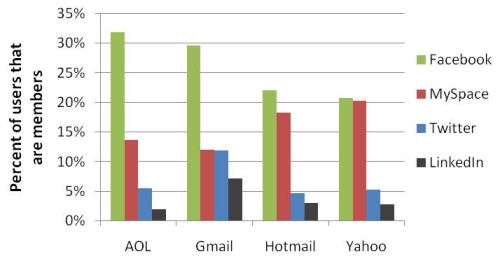 The Rapleaf study looked into the age, gender and social networking data of the sample population.

Not quite surprisingly, the study revealed that Facebook is the most popular social network among webmail users. Surprisingly, MySpace manage to retain some popularity especially among Hotmail users despite its dwindling popularity among the general users.

Twitter was also found to be popular among Gmail users, but not as popular in other social networks.

The most significant findings of the study is of course on user participation in social networks. The study found out that Gmail users are more connected with their friends, meaning they interact more often despite maintaining only one social network of choice.

Other webmail users on the other hand maintain several social networking profiles but don’t have as much interactions with their friends as Gmail users are.

Bottomline points to the fact that Gmail users are younger and more web-savvy hence they are more active in social networking sites than the more matured Hotmail, Yahoo Mail and AOL Mail users.